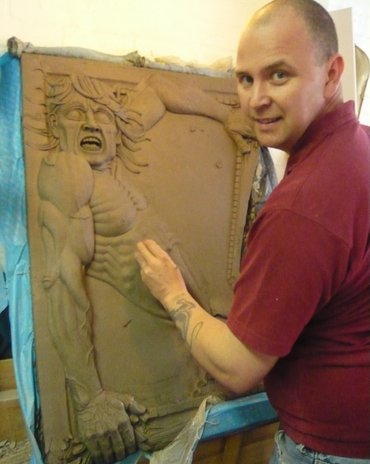 My name is Steve Eastwood, originally from High Wycombe, Buckinghamshire.

Up to the age of 19, I was just a run of the mill teenager, well to tell the truth I was a bit of a rogue, although not in a nasty way.

Four months after my 19th birthday, I was admitted to hospital with blood poisoning, due to an untreated tooth abscess and subsequently suffered a major stroke.

Whilst recovering, I was told that I wouldn’t be able to walk again and would have difficulty speaking. I was paralysed down my right hand side and as I was originally right handed this made life pretty difficult.

During 4 months of rehabilitation I began walking again and my speech improved with the help of therapists. I was introduced to pottery and people realised that I had a flair for art, even using only my left hand.

I was encouraged to continue onto college where I gained a BTEC national diploma in General Art and Design. I then moved to Stafford to achieve an HND in 3D design and figurative sculpture and a City & Guilds in teaching.

In 2003 I began voluntary work at Cannock hospital teaching pottery one morning a week. Eventually I was employed there and also at Stafford college running a disabled pottery workshop.

Since my stroke, my life has been turned around, I have discovered a talent that would have otherwise lay dormant and gone to waste. I’ve also become a far more determined person, I won’t let anything beat me and I strive to make the most of any situation. Who would have thought all this could be caused by a bit of toothache.